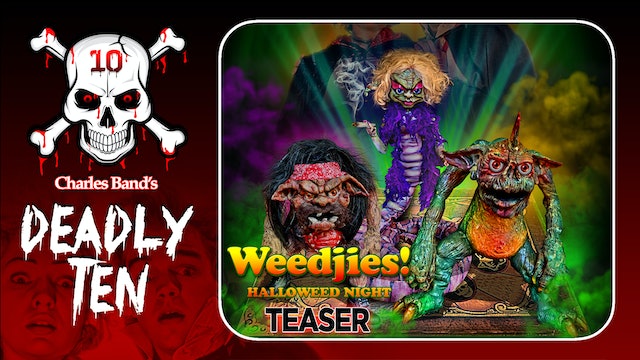 It's the eve of Halloween in Las Vegas and three enterprising young ladies are throwing a massive 420 gala. But little do they know, they're also going to unleash a freakish gaggle of party-loving nightmare-creatures from beyond. In the tradition of Empire Pictures classic horror comedy GHOULIES, the DEADLY TEN presents a new, original tale that's destined to become an instant Full Moon favorite. When a midnight scavenger hunt for a rare bud of weed known as the "Golden Nug" brings a group of party-hungry stoners to a haunted hotel, it seems like it'll be the greatest night ever. But when the enigmatic owner, Madam Haze, introduces them to the Weed-G-Board, they open a portal beyond our world, and unleash The Weedjies. This group of ghastly hysterical creatures has only one mission: Party 'till you die. Before Halloween night is over, the unwitting guests will have to fight for their right to party, and put The Weedjies back in the board - or end up sucked into the netherworld forever.