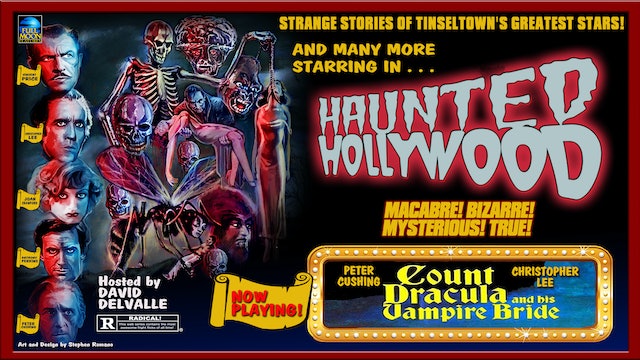 As he reached for greater roles, Christopher Lee spent the better part of his acting career keeping the shadow of Dracula, the bloodsucking Count, away from his more current persona. He was finally rewarded with parts in both Stars Wars and Lord of the Rings.

Therefore, he finally put a stake into the heart of the King of the Vampires, the very role that made him famous in the first place. "Count Dracula and His Vampire Brides" is really "The Satanic Rites of Dracula" made by Hammer Films. This turned out to be the final Dracula film the studio would make with Christopher Lee playing the Count and Peter Cushing playing Van Helsing.

Christopher was more than pleased to leave the role in his distant past as a working actor in the 21st Century. Christopher was very aware that to be type cast in Hollywood or the UK was not going to make him a star the way he wanted to be, as a top character actor who did play in James Bond films like "The Man with the Golden Gun" and "Airport 77".

David Del Valle was lucky to have been living in Hollywood when Lee was here making those films and they became good friends in the process. "Count Dracula and His Vampire Brides" is a better film than you might expect, so get a glass of red wind and watch Sir Christopher Lee put the bite on a number of buxom beauties here on Haunted Hollywood.