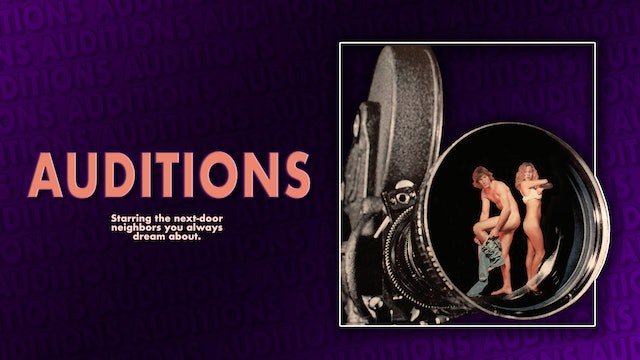 The line between reality and fantasy is blurred in Charles Band's legendary 1978 pseudo-documentary AUDITIONS, one of the strangest and most entertaining exploitation films of all time!

After the success of director Harry Tampa (aka Harry Hurwitz) and producer Band's softcore classic FAIRY TALES, the pair posted a casting call for what would be the immediate follow up film, FAIRY TALES 2. That's the framework on which AUDITIONS is built, featuring Tampa himself as a skeezy director getting the hottest men and women and weirdest performers in the LA area to come out and strut their salacious stuff on a soundstage. The resulting tapestry of uninhibited try outs serves as the meat of this mad movie, featuring real deal auditions with scripted appearances by a bevy of adult movie stars and even a young Linnea Quigley (RETURN OF THE LIVING DEAD), who had previously made her first notable screen appearance in FAIRY TALES.